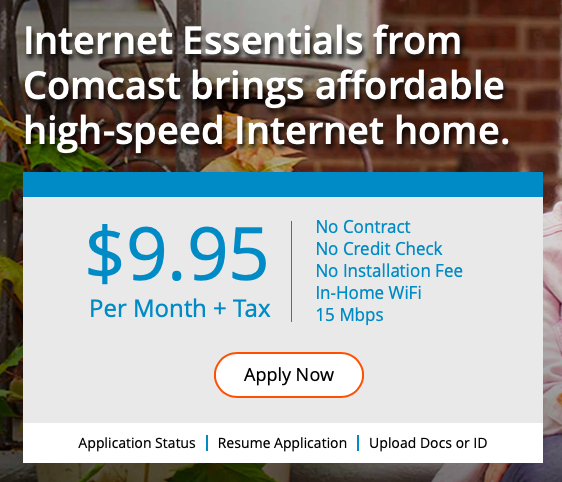 In 2011, Comcast launched Internet Essentials with the express purpose of getting more low-income Americans connected to the Internet. The service costs $9.95 per month and caps speeds at 15 Mbps.

Nine years after the service was launched it has more than one million subscribers, an impressive number, indeed. Nevertheless, up until last week (August 9, 2019), the service could not be accessed by most people with disabilities. Eligibility was limited to households with a student participating in the National School Lunch Program, those in public housing or who receive HUD Housing Assistance and veterans who participate in the Veterans Pension Program.

Last week Comcast addressed this shortcoming by announcing the largest ever expansion of Internet Essentials. It will now be available to all low-income households throughout its entire service area, opening up the program to many people with disabilities. Applicants will need to show that they participate in one or more government assistance programs, such as Medicaid, the Supplemental Nutrition Assistance Program (SNAP) or the Supplemental Security Income program (SSI). A full list of these programs can be found at www.internetessentials.com.

The expansion of the eligibility criteria means that approximately 7 million households in the Comcast service area will be able to benefit from Internet Essentials, more than doubling the number of potential beneficiaries.

RAZ Mobility commends Comcast for significantly expanding the reach of Internet Essentials, to the benefit of people with disabilities. It’s one more step towards closing the digital divide.

The Best Cell Phone for Stroke Victims in 2022